The Oblation and the University Avenue

No symbol is more closely identified with the University of the Philippines than the statue of the Oblation. The nude young man with outstretched arms and open hands, with tilted head, closed eyes and parted lips murmuring a prayer, with breast forward in the act of offering himself is Guillermo Tolentino’s representation of the second stanza of Dr. Jose Rizal’s Mi Ultimo Adios in response to the request of UP President Rafael Palma in 1935.

The Oblation (or Oble) was unveiled on November 30, 1935 at UP campus as Padre Faura in Ermita (now UP Manila) by Mrs. Gregoria de Jesus de Nakpil, widow of Andres Bonifacio. The cornerstone was earlier laid by Mrs. Aurora Quezon on November 30, 1931. It was dedicated to the national heroes.

He was fashioned out of concrete but painted to appear like bronze. It cost P2,000 which came from contributions of students, officials, alumni and employees of the University during a two-month fund campaign.

Oble withstood the ravages of the war and was standing at the quadrangle of UP Padre Faura on V.J. Day. On February 11, 1949, Oble was transferred to UP DIliman as part of the 40th anniversary of the University. The huge motorcade which accompanied Oble from Padre Faura to Diliman was “such as was never before seen of the alumni of the University.”

As part of the golden anniversary celebration of the University, the UP Board of Regents ordered that Oble be cast in bronze. The bronze statue was cast in Italy, under the personal supervision of Prof. Tolentino. On November 29, 1958, on the occasion of the University’s golden jubilee and 23 years after the original statue was first unveiled in Padre Faura, the 9-foot tall bronze Oble was unveiled in UP Diliman where it now stands in front of Quezon Hall, the main administration building of the University of the Philippines.

Oble stands on a rustic base, a stylized rugged shape of the Philippine archipelago, lined with big and small hard rocks, each and everyone of which represents an island. Its pedestal was formed from rocks from what was the Montalban River in Rizal, site of the fierce fighting between Filipino guerillas and the Japanese army during the World War II.

The Katakataka (wonder plant) is called siempre vivo (always alive) in Spanish. A leaf or a piece of it thrown anywhere will sprout into a young plant. Hence, it symbolizes the deep rooted patriotism in the hearts of our heroes. Such patriotism continually and forever grows anywhere in the Philippines. Furthermore, it is a variety which remains green throughout the year, and the spirit of service which Tolentino wanted to depict a spirit that should be steadfast and constant, one that does not lose direction nor intensity, come what may,

The fig leaf was added to Oble upon suggestion of President Jorge Bocobo. Oble stands 3.5m tall which represents the 350 years of Spanish rule in the Philippines. Anastacio Caedo pulled three casts in bronze which are situated in UP campuses in Manila, Baguio and Ilo-ilo. Napoleon Abueva’s concrete cast is in UP Los Banos and the most recent cast, also in concrete pulled by Mulawin Abueva, is deep underwater close to Sombrero Island where it was installed by the U.P Divers. The Oble in UP Cebu is not a cast but a replica and is attributed to Fidel Araneta, an alumnus of the College of Fine Arts. The original Oblation is now at the 3rd floor of the Main Library. At the base of Oble are inscriptions by Andres Bonifacio and Dr. Jose Rizal:

BACK: (from Mi Ultimo Adios) 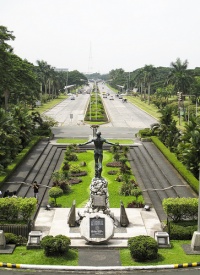 The main entrance to the University of the Philippines at Diliman is the University Avenue which is about 800 meters long of two four-car lanes. It has a junction with C.P. Garcia and an intersection with E. Jacinto Street.

The lane changes as the academic year progresses. In February, it is decorated with colorful banners to announce to all that it is UP DIliman month. In April, it is filled with sunflowers to greet the fresh graduates. In December, the 21 lamp posts are adorned with lanterns in celebration of the Yuletide season.

In the early days of UP in Diliman, the University Avenue was just a plain stretch of road. In 1956, an island was installed in the center of the avenue. The traffic lights were added in 1979.

The University Avenue welcomes everyone with public artworks. Just before the C.P. Garcia junction is the the twin public sculptural work of National Artist Napoleon Veloso Abueva entitled Tribute to Higher Education. It was executed in 1966. As the title implies, the work depicts the various academic disciplines pursued in the University.

The University Gateway is located just before the intersection with E. Jacinto Street. It is also a masterpiece of Abueva. It was the winning entry in the University Gateway Design Competition sponsored by the President’s Committee on Landscaping in September 1962. The Gateway complex is a set of three structures: two commuter sheds flanking a guard post at the center.

Near the intersection with E. Jacinto Street, are the works of Ildefonso Cruz Marcelo. One is Captivity, the other, Contemplation and the last one is Nude Bathing.