Union of Journalists of the Philippines UP 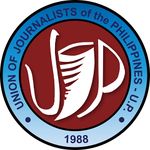 UJP-UP Diliman was established in September 8, 1988.

Error creating thumbnail: File with dimensions greater than 12.5 MP
UJP-UP was hailed by the college as the Most Outstanding Organization in 2015

The name 'Union of Journalists of the Philippines' was originally used by the NUJP but by the time it decided to register itself as a formal organization, having several chapters in the country, it decided to add "National" and adopt the name 'National Union of Journalists of the Philippines' instead. Until now, the NUJP uses the UJP initials in its logo.

After the terrible fate of the media and the Filipino people during Ferdinand Marcos's Martial Law and with the restoration of democracy in 1986, several Filipino media practitioners founded the NUJP to promote media professionalism and unionism. NUJP recognized that promoting a professional and unified media should start where it matters – students who are to be future media practitioners.

In 2015, the union was hailed as the most outstanding organisation in the College of Mass Communication.

"United in the belief that press freedom and advocacy journalism are vital in mass communication as means in upgrading skills in the profession, promoting people's rights and welfare, taking a conscious stand and form of action on issues, and actively partaking in the struggle for societal change."

The union is active in issues inside and outside the university. Combining academics and play, UJP supplements education provided inside the walls of the classroom.

Writing on the Wall Street (Feb. 17, 2009) - A forum on the media coverage of the global financial crisis. Speakers from IBON Foundation, Philippine Daily Inquirer, CMFR and NUJP.

Crushing the Pen: Media Repression Then and Now (Feb. 19, 2008) - Forum on media repression during the Marcos and Arroyo administrations. In coordination with the College of Mass Communication Office of Research and Publication.

Gagging the Press - on media killings

How Safe Are We? (Aug. 24, 2007) - A forum on the Human Security Act or the Anti-Terrorism Act of the Philippines. Speakers were Prof. Danny Arao of the UP-CMC Journalism Department, Joe Torress of NUJP and Jerrie Abella. Foreign Ownership of the Philippine Media (2005)

Understanding the Oakwood Mutiny - ACLE with guest speakers from Bayan Muna. It was awarded the KaMalayan Best ACLE by the UP Diliman University Student Council.

Media Report (January 2012) - ACLE with guest speakers Tikoy Aguiluz, Bryant Macale from CMFR, Prof. Choy Pangilinan from the Broadcast Communications Department, and Pauline Gidget Estella from the College Editors Guild of the Philippines. This has already been an annual forum organized by the organization which aims to know the state of the media for the past year.

Surveying the Media (August 2012) - ACLE on the effect of surveys to the voting public. Speakers from the Social Weather Stations, TV5 and Kabataan Party-list were invited.

The Hazards of Seeing: Assessing the Witness Protection Program of the Philippines (September 28, 2012) - As part of the celebration of UJP-UP's 24th anniversary, the organization invited speakers from the Witness Protection Program of the Philippines, KARAPATAN and NUJP to talk about the state of the WPP in the country. This was done in connection to the killings of the Maguindanao Massacre witnesses who then refused to undergo the WPP.

Pit Stop (June 2013) - A media situationer that introduced the FSTs of the state of our media today. The speaker was Rupert Francis Mangilit, former CMC Student Council Chairperson and presently the Secretary General of the National Union of Journalists of the Philippines. This is in partnership with the local college council.

Panitikan at Pahayagan (September 2013) - As part of UJP-UP's 25th anniversary, the organization invited Dean Roland Tolentino, Palanca Awardee Jun Cruz Reyes, and Palanca Hall of Famer Reuel Aguila to have a forum on literary journalism and how literature and journalism as separate aspects shape the narrative of the nation.

An editorial cartoon making contest is held every year during the union's anniversary month.

A photojournalism contest held during the celebration of the UJP month.

National Union of Journalists of the Philippines

Solidaridad - alliance of student publications in UP Diliman

College Editors Guild of the Philippines

Among the union's alumni are student leaders, editors-in-chief of the Philippine Collegian and Tinig ng Plaridel, media workers in national broadcast networks, national newspapers and alternative and online news institutions.

UNIVERSITY OF THE PHILIPPINES

Vice Chairperson for Information and Research

2015 UP CMC Most Outstanding Organization