The University of the Philippines Engineering Radio Guild (UP ERG) is a duly recognized organization based on the UP Electrical and Electronics Engineering Institute. The organization currently has active members sharing the same vision of a united EEE community with the core values of excellence and service. They actively promote the holistic development of their members, being excellent not only in academics and problem-solving skills but also in people skills – a valuable quality of leaders. They exemplify service through various academic and social projects, further increasing the consciousness on the power of collective action in bringing positive change not only in the college but also in the country.

UP ERG also takes pride in its alumni who are now key players in the government, the academe, and the industry. The organization has now evolved from being an amateur radio station way back in 1935 to a full-pledged student organization. The UP ERG family continues to grow into a dynamic community with a thrust in building a bridge between the academe and the industry through projects like Dagitab Technofair and CarEEEr Talk.

In 1935, a group of electrical engineer/radio enthusiasts led by Solon Mathew Dakis founded an amateur radio club in Florida Street, Manila. Realizing the need to establish outside university communication links, these young pioneers pushed for the acquisition of a license to put up a radio station known shortly after as KA1UP. And thus begins the life of the University of the Philippines Engineering Radio Guild (UP ERG).

In the year 1953, ERG found both a name and a home in the UP campus. Through the efforts of Mr. Javier Palaban of the Department of Electrical Engineering, it was officially granted its organization name. Its members assembled a transmitter-receiver set from old surplus equipment to be able to put up a campus radio station with the call sign DU1UP.

From then on, each year stood witness to how the UP ERG has expanded from an amateur radio guild to a full pledged departmental organization. It has sponsored lectures and seminars, participated and conducted sports and leisurely activities, and assisted other organizations in problems that were generally electric in nature.

From youthful stem to sturdy trunk

1963 paved the way for the UP ERG quiz show, the first ever annual event sponsored by the organization. The quiz show started as inter-departmental and later on evolved into an inter-university and inter-collegiate project in 1972.

Side-by-side with the expansion of the quiz show, the organization took pride in having the distinction of being the first departmental organization to establish a scholarship program, the first recipient being Romulado Adao. In conjunction with the scholarship program, a book foundation was also launched to supplement the reading needs of students and to keep them updated on the latest developments in power, electronics, computers, and the like.

The organization suffered major financial and technical setbacks when the government declared martial law. This resulted in the cancellation of the DU1UP license, the confiscation of the radio station instruments, and a halt of its many activities. But the org demonstrated strength and resilience through the reawakening of the scholarship program and book foundation in the later part of 1973.

The Department of Electrical Engineering underwent academic restructuring in 1994 adding new courses: Electronics and Communications Engineering and Computer Engineering. Revisions were then made in the organization’s constitution to accommodate students coming from these two courses. In the same year the org felt the need to represent itself and hence the birth of the new ERG logo (the former logo brandished a Bipolar Junction Transistor). The year 2000 was highlighted by the first ECE quiz show, a sponsored brand sale, and an on-campus concert. It was also in this year that UP ERG Los Baños chapter was created.

2004, ERG’s 69th year, was a fruitful one. It was on that year that the Dagitab Technofair and CarEEEr Talk was launched. ERG was crowned as the First Engineering Organization Excellence Awardee. ERG continued to blaze its trail of excellence as it celebrated its 70th year with a one-month booze of activities dubbed as “ERGxeLXXis: Familia, Historia, Gloria”. It was also in this year that the ERG Alumni Association was established and donated a 40-seater discussion room to the College of Engineering Library II, called the ERG Discussion Room. ERG also proved its worth and strength in the University that year as it became one of the top seven organizations comprising the UP Freshmen Orientation Program Committee, thus becoming a part of its Steering Committee. ERG became part of the Steering Committee for four years securing the Second Place in the FOPC 2006 and 2007 and Third Place in the FOPC 2008 under its belt.

On its 72nd year, ERG achieved another great feat. The organization garnered its highest finish in the Engineering Week, securing the Third Seat and is still on its way to the top. Once again, ERG experienced a moment of glory when it received another Engineering Organization Excellence Award. Two great years passed and the UP College of Engineering’s premiere organization once again proved its worth when it launched its newest event, Strikeout: Amateur Bowling Tournament, and its third Ultimate Frisbee Tournament, Catch: UFO Spotted.

On its 77th year with more achievements underway, the UP ERG family continues to grow, despite many impediments. Its roots continually dig deeper, its trunk emerges steadfast as ever and its leaves branch out wider to embrace each rising and setting of the sun. However varied its branches and leaves maybe, the same life-giving sap nurtures and flows through it.

The UP Engineering Radio Guild has 206 active members for the first semester of school year 2014 - 2015. 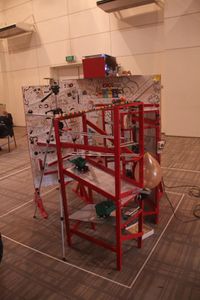 The Rube Goldberg machine designed by the University of the East won 1st place in the first day of the EEE Summit.

In today’s age of increasingly progressive information and technological development, there have arisen multiple venues upon which the various specifics and issues entailed in information technology are tackled and discussed to further the growth of the field. As an organization which promotes academic and practical advancement in the same field which it calls home – Electrical and Electronics Engineering (EEE) – the University of the Philippines Engineering Radio Guild (UP ERG) has organized an event specially geared and tailor-made for its students: SYNERGY: EEE Summit 2012.

SYNERGY: EEE Summit 2012 is an event organized by UP ERG which aims to be an avenue wherein EEE students from the various colleges and universities will engage in a 3-day congregation where they can learn, compete and realize the importance and relevance of Electrical and Electronics Engineering in the country – and with it, a vision of bringing to reality the theories and numerous possibilities being taught to the students within the halls of the academe.

SYNERGY: EEE Summit 2012 is composed of four events which aim to bring out every EEE students’ potential. These are the Rube Goldberg Machine Design Competition, TechnoCast: Innovation Conference, Synergy Talk and Project Synergy. 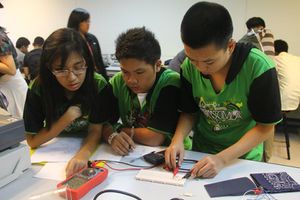 Dagitab 8 Day 1 was held at the Electrical and Electronics Institute of UP Diliman.

DAGITAB is the Filipino term for “electricity”, an essential concept behind modern electrical, electronics, and computer technology and applications today. The project started in 2005 and was then known as the “Dagitab Technofair” handled by the Technicals and Academic Concerns Committee of UP ERG. Originally, Dagitab Technofair was a one-day inter - high school competition which showcases electrical and electronics engineering – related topics.

On its 4th year, Dagitab Technofair was stopped as a research competition and was changed into a month-long workshop series instead, having both lecture classes and hands-on laboratory work for high-school students. "Dagitab", as it was now simply called, took on the challenge of introducing electrical and electronics engineering as an interesting and fun field, and as a possible career to pursue in the future.

With the success of the previous seven Dagitab events held, Dagitab projects have had so much experience in making high school students discover the wonders of the field of electrical and electronics engineering at a young age by promoting it through the help of lecture series and hands-on part in the laboratory sessions. Dagitab has established quite a reputation among its participating schools by making the participants learn the fundamentals of different basic electronics subjects in its pre-organized curriculum, as well as enjoy it, by showcasing them different fun activities during the culminating event. 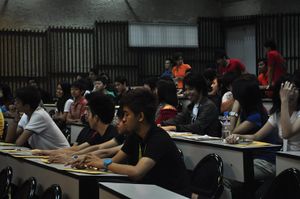 CarEEEr Talk 2011: E-nnovations was held at the PLDT Multimedia Hall of Electrical and Electronics Institute, UP Diliman.

CarEEEr Talk is a whole-day event that aims to give EEE (Electronics and Communications Engineering, Computer Engineering and Electrical Engineering) students from different colleges and universities an overview of the career paths that they may pursue after graduation.

CarEEEr Talk aims to give an overview of careers in the field of Electrical, Computer and Electronics Engineering and Computer Science. It also prepares graduating students for job hunting and extend job opportunities to engineering students from UP and other universities. It also builds a community that would break the divide between fresh graduates and employers.

The event is composed of several seminars which feature distinguished guest speakers from the academe and the industry whose expertise and broad knowledge will enlighten the participants to careers options they have.