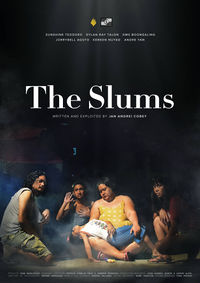 The Slums is a film about a poor family that hosts a documentary that covers the daily events of their household. However, the crew’s methods of documenting prove to be too much for the family, with the team constantly interfering with the family’s life in their coverage. The family reaches their breaking point when the crew accidentally drops the family TV, an object that is central to their life. The family then pounces on the team and grabs the camera from them, driving them away from the house.

This page has been accessed 2,010 times.