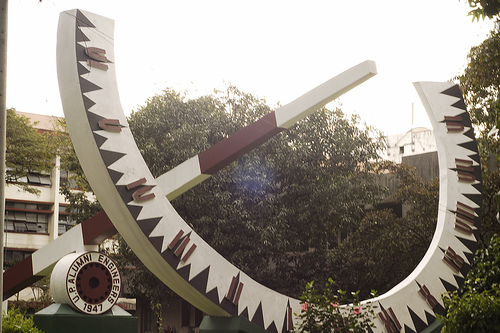 The Sundial is one of the earliest devices used by man to tell time. It is a device that measures time as an effect of the earth's movement with reference to the position of the sun.

The UP sundial’s history is closely linked with that of the College of Engineering, for wherever the college went a sundial followed.

The first site for the college was a residential house of the O’Brien family in Ermita. On September 1910 it moved to where the Philamlife building currently stands. They had a small sundial then at the corner of Taft and Padre Faura. Upon moving in 1930 to Maria E. Orosa, now the current building of the Court of Appeals, a much larger sundial was built. This sundial was in the middle of the Ermita campus.

The dean of the College at that time was Edward R. Hyde. He had first come to the college in 1920. Mr. Hyde was an American civil engineer who had previously taught at West Point. Aside from being the Dean Mr. E. R. Hyde is also attributed to the designing of the engineering building and the huge sundial which was bedecked with flowering vines and had a gnomon of 60ft in length. Professors Alejandro Melchor and E.P. Angeles, were said to be seen tramping across the campus to inspect the construction of the sundial project which the three of them collaborated in designing. It was said to be one of the largest sundials of its time. However, it was torn down during the commonwealth era to provide more space for military training which was emphasized at the time.[1]

Before the end of 1948 the seat of the UP System began transferring to the Diliman Campus. In 1951 the current engineering building, Melchor hall, was constructed. In 1958 the UP Alumni Engineers (UPAE) built a Sundial on the front lawn of Melchor Hall, by the corner of Osmena and Roces Avenues. It is where the new digital sundial now stands. It was made of steel on concrete moorings with a gnomon in the shape of a slide rule, at the time the symbol of mathematical skill. [2] [3]

Unfortunately in 1968 Typhoon Yoling passed Manila and caused destruction of campus residences and buildings. In the College of engineering, the new east wing and the engineering theater were partially unroofed. This typhoon led to the dislocation of the sundial. The gnomon was wrenched from its foundations and was displaced toward the street. [2]

After the destruction of the sundial in the front lawn of Melchor hall, in 1972 the UP Alumni Engineers started the construction of the present-day sundial. It is located in G. Apacible street, now at the center of the engineering complex. It was Chato Calderon(CE’72) who was the its supervising engineer. Following in the footsteps of her father, Quintin A. Calderon(CE’36) who was UPAE president 1970-1972, she was the first lady president of the UPAE. [5]

The current sundial has a design similar to the one destroyed by Typhoon Yoling. At the base of its gnomon is the year 1947, which signifies the founding year of the UP Alumni Engineers. This shows how closely related the sundial is to the college of engineering as well as the great importance that the alumni of the college have given it.