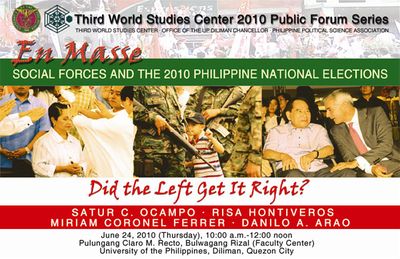 About the Forum In the last decade, the Left crossed the line it swore it will never cross--most tellingly in the recent elections. It has entered the arena of power and contestation, which for a long time has been dominated by traditional politics. "Progressive" lawmakers Risa Hontiveros, Liza Maza, and Satur Ocampo, who are set to retire in the Lower House due to term limits, gambled to secure a seat in the other legislative branch. Hontiveros joined the much-hyped yellow camp while Maza and Ocampo allied with a self-proclaimed champion of the masses. Unfortunately, they got caught in a no-win situation. The partylists, such as Bayan Muna and Akbayan, on the other hand, will keep their clout in the political arena. Nine representatives from the Left were recently proclaimed members of the 15th Congress. What could explain the defeat of the Left while trying to expand its influence in the political arena? Did the Left spend enough time for cogitation before considering taking these actions? Why did their mass base, as shown in the unbroken successes in the Lower House, fail to bring them to the Senate?

Even with these developments, openly participating in the polity, its focal point of attack, remains an unusual direction for the Left. Cooptation and demise of long-held principles, though, are feared to be the prices of this detour. What led to these acts of irony? Are the political activists from the Left taking themselves in the right direction? Is this not a deviation from their envisioned track? Is a rethinking pressing at this time with the seemingly continuing failure of the Left to expand its mass of believers? What is at stake in this turn of events vis-à-vis the incoming administration?

To look beyond personalities and petty platforms, to strip of spin the electoral process, to resist the candidates’ inchoate incantations of change, to make the public understand the different currents of social forces that surge and animate the body politic during this most crucial of democratic exercises, to make the public realize why these social forces matter: these are the objectives of the series of public forums that the Third World Studies Center (TWSC) will be organizing prior to and right after the 2010 Philippine national elections. Social forces, as defined in the Philippine context by Abinales and Amoroso in their bookState and Society in the Philippines, “are movements and voluntary associations with political agendas that contend with each other and the state. They try to achieve their goals through coalition or accommodation with or defeat of other groups or the state, are willing to move into the state, or may endeavor to take over the state.” With such definition, the religious formations should be prayed upon to confess why they have given their blessings to certain office seekers. There should be a call on the business community to account for the calculations they have made on which winnable candidate’s campaign coffer to fill. Civil society must be more candid than civil and reflect on their supposed moral projects to reshape the government. And the military must go beyond tired statements of neutrality even if some of its so-called renegades also rehash programmatic press releases tinged with messianic sentiments.

In organizing these forums, the TWSC hopes to provide a clear and scholarly discussion which will answer these questions: Will the social forces achieve their goals through the electoral process? How do these social forces view and value the election? How will they deal with the new administration that will take office in June 2010? The answers to these questions will inform the public of the terrain of contestations that they have to walk on and live by in the immediate years to come. Thus it is important to start asking these questions now and demand an answer not only from those that publicly avow that they will serve the people, but more importantly from the social forces that claim that they are the people and thus must be served. AddThis

This page has been accessed 1,882 times.