Template:Infobox actor Pocholo "THE VOICEMASTER" Gonzales is a Filipino voice actor whose voiceover work has appeared in radio and TV commercials, audio dramas, children's programs, computer games, dubbed foreign telenovelas, films and anime, and original animation. He conducts voice-acting workshops and runs a full-service voiceover production company, Creativoices Productions www.creativoices.com and an events company called CreativEvents Management. He also works as a voice director for HERO TV,[1] and is Executive Producer of Voice of the Youth TV,[2] the only TV program dedicated to young Filipino voice talents. He did the voice of Toti (a Manananggal) and Hal An (a villain) in his first full length digital animation movie Dayo: Sa Mundo ng Elementalia, an entry in the Metro Manila Film Festival produced by Cutting Edge Productions[3]. Recently, He's part of a training and motivational group called INVOLVE CONSULTANCY, Together with Al Ian Barcelona of AIB Training, Lloyd Luna, PJ Lanot and Cornel Bongco, where they train and develop young people, young professionals, corporate executives, government officials, students, teachers and university staffs. He's also a Filipino Personal Branding Expert and so far speak to more than 100 schools and universities around the world.

Gonzales has worked as a voice actor since 1996, when, at age 17, he won the voice acting competition of DZMM's Drama and Singing Contest Radyo Radyo with Joey Galvez and May Valle. He graduated from UP Diliman with a BA in Speech Communication and took up his Master's Degree in Broadcast Communications. Under Tinig Kabataan or Voice of the Youth (VOTY), an advocacy organization he and several friends founded, he also anchored the only youth advocacy radio program at DZME.

In May 1998, Gonzales was chosen by legendary Rene O. Villanueva, Creative Director of Philippine Children's Television Foundation Inc. Batibot to do voices for its puppets and program. Recently, he was cast to do the voice of Toti and Hal An for his first Digital Full Length Animation Movie entitled DAYO THE MOVIE. He was the only professional voice artist among other TV Personalities who did voices for Dayo, but before DAYO, he was asked by its producer, Jessie Lasaten to direct, write, and voice its first animation project under Star Records entitled "Little Big Deeds" with Little Big Star Singers such as Sam Concepcion, Charice Pempengco, Makisig Morales, Rhap Salazar and others.

He was also called the Father of Philippine Podcast, He is responsible for ELEKSYON 2007 PODCAST where he podcast all the senatoriables. http://newsinfo.inquirer.net/podcasts/. He also did Digital Filipino Podcast, Titik Pilipino Podcast, Hackenslash the Podcast, E Telecare Podcast, Ang Gara ng Buhay Podcast, Tek Tok Podcast and many other. 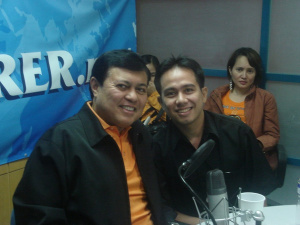 Gonzales with Senator Manny Villar during the podcast session of inquirer.net Election 2007 Podcast in Makati.

He's recently hosting and producing PINOY POPCAST with The EventsMaster Azrael Coladilla and the rest of Filipino Bloggers.

He directed and voiced the new Yahoo Messenger Pinoy Audibles.

In November 6, 2009, He was awarded as one of the Most Inspiring Bataeno MicroEntrepreneur by no other than the President of the Republic of the Philippines, Pres. Gloria Macapagal-Arroyo, Joey Concepcion of Philippine Center for Entrepreneurship and GO NEGOSYO, Hon. Enrique "Tet" Garcia Jr, Governor of the Province of Bataan, Congressman Abet Garcia of Bataan and Mayor Joet Garcia of Balanga City for building CreatiVoices Productions, following his commitment in turning a business out of his voice-acting craft, and along the way providing inspiration and opportunities to other voice talents, thereby helping cultivate the voice acting industry in the country. By the exemplifying the qualities of a successful entrepreneur, he is proof that Bataenos have the passion, creativity and determination to start a business and turn the country into an entrepreneurial nation.[4]

Gonzales has done a lot of voice-over opportunities for professional and aspiring voice talents. He is organized the first and only Voice Acting and Dubbing Contest in the Philippines, The DUB IT OUT! Dubbing Contest in partnership with HERO TV. He is also doing a voice acting competition at TOY CONVENTION. His company CreatiVoices Productions and the voice artist organization that he founded the Society of Young Voice Artists of the Philippines (SYVAP) www.syvap.org has been participating with almost all anime conventions in the country like Toy Con, Ozine Fest, Mangaholix, Nemikazi, Anime Overload Festival, Utaku Expo, GlassHouse Event and Hataw, Hanep, Hero. He Co-Organize Metro Comic Con 2009.

He produced the only TV program that features voice talents on Voice of the Week in 2008, a segment of VOICE OF THE YOUTH TV aired over the Global News Network of Destiny Cable channel 1.[8]

Gonzales is running the only voice acting school in the Philippines, The Philippine Center for Voice Acting. The seminar/workshop was dubbed VOICEWORX! Basic Voice Acting and Dubbing Workshop. 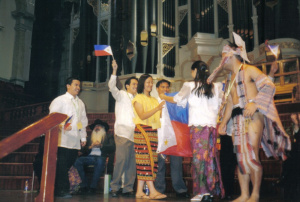 Gonzales raising the flag of the Philippine at Sydney City Hall together with other Filipino youth. He's attending the International Youth Parliament in Sydney, Australia in 2004

Early in his career, Gonzales helped to found Voice of the Youth. For more than four years, their radio program aired for two hours each Sunday, giving young people the opportunity to voice their ideas and opinions on a range of issues impacting their lives. At present, VOTY has grown into a collaboration of youth organizations in nearly all provinces of the country, with the goal of providing networks, tools, resources, and recognition for youth leading positive change in their communities.

He has said that he sees great promise in utilizing communication technologies to strengthen youth participation, networking, collaboration and leadership, believing that multi-media—radio, TV, newspapers, mobile phones and the Internet - are powerful tools to inspire, inform, and involve youth towards empowerment.

In 1998, Gonzales became an active youth coordinator and the youngest participant of the 2nd National Youth Parliament (NYP), a biennial assembly of youth representing various sub-sectors and geographical groupings nationwide to develop a legislative-executive agenda for youth development. In 1999, he became a delegate of the Medium-Term Youth Development Plan which served as a guide for government agencies in the implementation of youth-related programs.

He participated in the 27th Ship for Southeast Asian Youth Program in 2000. In 2001 he was chosen by other youth leaders to represent his region for the 1st National Youth Summit or Pambansang Ugong Ng Kabataan (PUNK), a project of the National Youth Commission and Department of Social Welfare and Development. The topics and problems discussed were then documented and presented to President Gloria Macapagal-Arroyo.

In 2003 he helped organize the Philippine celebration of Global Youth Service Day held in Balara, Quezon City on April 11–15. He was the main reactor and discussant for the Fifth National Social Science Congress (NSSC V), held May 15–17. He was one of the top participants for the Young Leaders Program of the National Defense College of the Philippines Institute for Extramural and Continuing Studies, and the youngest delegate and awardee of the 8th Open Conference on Cooperation for Responsible Citizenship and Corporate Governance. On June 12, 2003, he received a Youth Action Net Award given by the International Youth Foundation.[9] 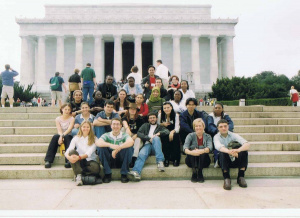 Gonzales in front of Lincoln Monument in Washington D.C. USA with other International Youth Foundation, Youth in Action Awardee from around the world. Circa 2003

In 2004 he attended the World Youth Peace Summit in Bangkok, the International Conference on Youth Empowerment in Hong Kong, and the 2nd International Youth Parliament in Sydney, Australia. He also won the Youth in Action Award given by the Global Youth Action Network in New York City. That year, he was invited by the Office of the President to work with the Youth Affairs Office under Marc Castrodes, then became Office of Presidential Assistant for Youth Affairs under Dennis Cunanan, which became the Youth Arm of the President of the Philippines to promote a Strong Republic; he traveled the Philippines as a representative of this office. After the election of 2004, he was detailed at the Commission on Higher Education as Staff.

In 2005, he founded the Society of Young Voice Artists of the Philippines, an organization that promotes voice acting as an art. That year, he was one of the ten Filipino Delegates who was chosen to represent the Philippines to the Young Global Citizen of the British Council in Jakarta, Indonesia.

He also participated in Filmart Hong Kong in 2006, Gwangjung ACE Fair in South Korea in 2007 and CommunicAsia/BroadcastAsia in Singapore in 2005. 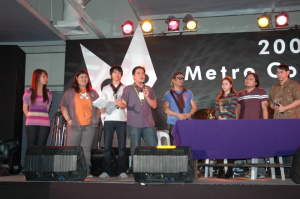 Pocholo Gonzales on Stage with the Father of Modern Dubbing Industry Danny Mandia at the 1st Metro Comic Con 2009 in Manila, Philippines.

This page has been accessed 5,554 times.