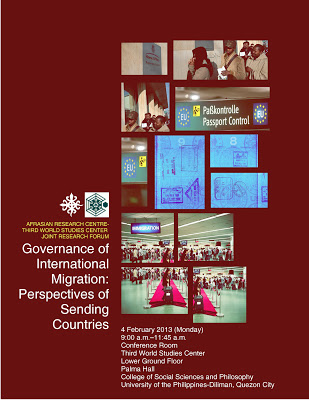 
The University of the Philippines Third World Studies Center (UP TWSC) and Afrasia Research Centre of Ryukoku University are co-hosting a Research Forum entitled “Governance of International Migration: Perspectives of Sending Countries, which is aimed at (1) sharing research outputs, views and ideas by researchers from the Philippines and Japan on the said topic, with special focus on Japan and the Philippines, and (2) exploring some possible research agendas in which the two research institutes can collaborate in the near future. TWSC and Afrasian Centre are currently in the process of drafting a Memorandum of Understanding, (the signing of which is expected to be held within this school year), under which joint research will be actively pursued and a teleconferencing system is provided for the use of TWSC for its international research and networking activities. This Forum will be attended by professors and research fellows of the Afrasian Centre and TWSC, as well as students and researchers from UP. This Forum is also part of a 3-day Workshop of Afrasian Centre in which the delegation will visit several stakeholders involved in international migration, such as the Commission on Filipinos Overseas (CFO), NGOs and several communities of migrants and those “left-behind” in order to listen to them and understand their perspectives on the matter.

The Governance of International Migration Jorge V. Tigno, DPA Department of Political Science College of Social Sciences and Philosophy, University of the Philippines-Diliman

The (national) governance of international migration raises some serious concerns about the integrity and sovereignty of states. International migration poses a challenge to states primarily because of the numerous tensions that exist between the local / national, the international, and the global / transnational. This is one reason why there's a high degree of uncertainty, ambiguity, or ad hoc-ness manifested in the migration policies of states whether they are in destination or in sending areas. State governance of international migration is such a daunting project that it requires strenuous efforts on the part of the national government to steer or direct the phenomenon towards the attainment of national development goals. At the global level migration governance requires serious consideration of commonalities and similarities (which are few) but also attempts to overcome the differences and the specificities within each country (which are many). Any attempt to craft a national migration governance framework much incorporate a coherent set of national goals through which the governance experience itself might be evaluated including consistencies with existing global norms and best practices.

In this paper I explore migration governance by considering whether the interests of the labor-sending countries with those of labor-receiving countries can be harmonized. I would consider the cases of the United Arab Emirates (UAE), a labor receiving country and those of Bangladesh, a labor-sending country. Rapid infrastructural and socio-economic developments in the UAE combined with the demographic realities of the country led to the reliance of temporary contract workers from various labor-surplus Asian countries. While temporary migrant workers they play an important role in the UAE economy and through their remittances also play a major role in their respective national economies, their conditions often remain precarious.

Improvement in the governance of the temporary labor migration can be of great benefit both for the stake-holders involved, namely, the labor receiving country, the labor sending countries and also the contract laborers. The UAE government has taken leadership in this regard by initiating the Abu Dhabi Dialogue in January 2008 in partnership with International Organization for Migration (IOM) where all the major stake-holders were present: the representatives of the labor sending countries, labor receiving countries, international NGOs such as Human Rights Watch, IGOs like IOM, ILO, etc.

Since the late 1970s Bangladesh has been a labor sending country vis-à-vis the UAE. As many as 700,000 Bangladeshis now work in the UAE dominating the construction and other labor-intensive work. Bangladesh government has shown keen interest in promoting labor-migration as a strategy for national development. Income from remittance has continued to soar in recent years reaching 12 billion US dollars in 2012.

To improve governance a clearer understanding of the best practices in each of the labor sending countries and learning from each other’s experiences is of utmost importance.

This page has been accessed 1,847 times.