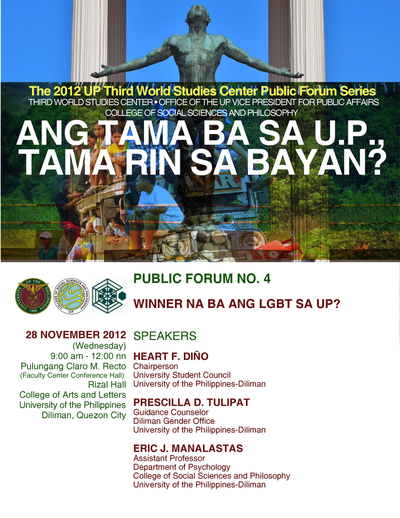 Please click here for the playlist of the forum's video recordings.

In March 2012, the Philippine Daily Inquirer editorial wrote that, UP, “true to its vaunted cutting edge . . . has produced another first,” with the triumph of Heart Diño as the first transgender University Student Council (USC) Chairperson. Bisexual and transgender students were also elected as USC Vice Chair and Councilor respectively. But this unprecedented victory has blotted out events that left a bad taste in the mouths of those exalting UP as “a sanctuary of openness, acceptance and liberalism for members of the Lesbian, Gay, Bisexual, Transgender (LGBT) community.” Other candidates to the USC chairperson post, belonging to progressive organizations and taking pride in their feminist and “inclusive-activism” advocacies, have allegedly made heteronormative and transphobic remarks against Diño during her candidacy. Moreover, said milestone for the LGBT struggle transpired shortly after UP Babaylan, the first and largest LGBT student organization in the Philippines, had claimed that discrimination is still prevalent in the UP Diliman campus. Graduation rites, org applications, rest rooms, office space, and classrooms remain sites of bullying, ridiculing, and stigmatization. This is despite the promotion of gender equality within the university through university gender sensitivity initiatives, university gay games, university educational discussions on LGBT issues, and tie-ups with other LGBT organizations. The UP Charter of 2008, as stated in the UP website, mandates UP to go beyond traditional solutions and pursue innovative approaches on issues confronting the University. Despite UP’s avowedly progressive view of LGBTs, can UP be considered as privy to gender discrimination or is UP’s cognizance of LGBT issues “marked by a mild or negligent tolerance” as suggested in the UP Forum? This forum thus looks at the present stance of UP towards the LGBT community from the perspectives of the various sectors within the UP System.

1. What are the different issues confronted by the LGBT community in the university?

2. What is the stance of UP towards the LGBT community against the backdrop of LBGT issues in the country?

3. Despite its avowedly progressive view of LGBTs, can UP be considered as privy to gender discrimination? How can it be demonstrated otherwise? Or is UP’s cognizance of LGBT issues “marked by a mild or negligent tolerance”?

4. Does UP adequately address gender discrimination issues within the university? What are the policy frameworks and institutional mechanisms in place to ensure that the university promotes and protects LGBT rights? Does UP have the statistics to back up its claim to the existing LGBT climate in UP?

This page has been accessed 1,578 times.