The University of the Philippines Sidlangan is a duly-recognized organization of the Biliranon, Leyteño, and Samareño students of the University of the Philippines Diliman. It is committed towards the promotion of the highest degree of competence and excellence among its members by providing them channels for individual growth through their active involvement in various academic and socio-civic activities held not only in Metro Manila but in the Eastern Visayas Region as well.

UP Sidlangan was established on February 16, 1976. It serves as the home away from home for UP Diliman students from Eastern Visayas. Since its founding, the organization has produced alumni who became the prime movers of the region.

UP Sidlangan has been expanding its network by actively participating in the Generation Peace, a peace-advocate movement among youth organizations nation-wide. It has also been an active member of the UP Sanlahi Alliance, the umbrella organization of provincial, regional and ethno-linguistic organizations in UP Diliman. For two years, UP Sidlangan was awarded as the 'Best Organization' among the member organizations of UP Sanlahi.

UP Sidlangan is one of the biggest among regional and provincial organizations in UP Diliman. It continues to offer holistic development among its members by exposing them to various events and activities while being of service to the home region.

1) To unite and organize the UP Diliman students from Region VIII for the attainment of their common interest. 2) To encourage activities and endeavors toward social, cultural, and intellectual development among its members. 3) To foster greater mutual understanding, unity and cooperation between the members and other students. 4) To instill national consciousness among its members in order to continue in the assertion of the Filipino people’s rights and well-beings. 5) To render service to the Eastern Visayas region in whichever way the organization can provide. 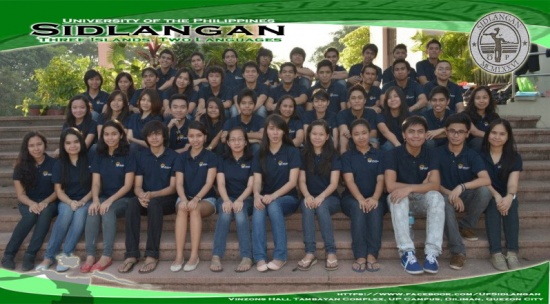