UP Cinema Arts Society (UP CAST)

The UP Cinema Arts Society (UP CAST) is an academic-based non-profit organization of film enthusiasts based in the College of Mass Communication, University of the Philippines - Diliman. Founded on August 24, 1990, our organization aspires to train members in the technical and aesthetic principles of film and video production, seeking to contribute to the growing consciousness of Philippine Cinema.

As we continue to pursue this aim, we have never abandoned our full-fledged commitment to promote and encourage the development of a critical Filipino film audience and future media practitioners of the country through our various projects.

The UP Cinema Arts Society (UP CAST), founded on August 24, 1990, is an academic-based non-profit organization of film enthusiasts based in the College of Mass Communication, University of the Philippines - Diliman. 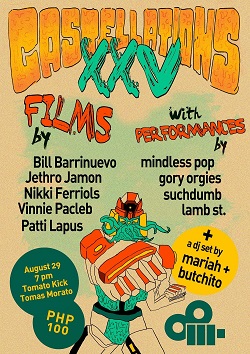 For 25 years, we've been holding alternative learning venues to complement classroom discussion, guiding students by supporting student film or video productions, facilitating workshops, symposia and film viewing activities and training our members in the different aspects of production to create well-rounded and competitive upcoming practitioners in the industry.

Castellations is an annual event held every August in celebration of the UP CAST Month. Here, films of members and alumni are screened with performances from various bands in between. Complementary foods and drinks are served

We are proud of our award-winning members and their films. A number of our members have and are actively participating in film festivals such as the UP Film and Video Festival, Inyorai, Piling Obrang Video Film Festival, Ateneo Video Open, Gawad CCP, Cinemanila, among others, and in other art alliance organizations.

Our notable alumni are:

This page has been accessed 1,012 times.