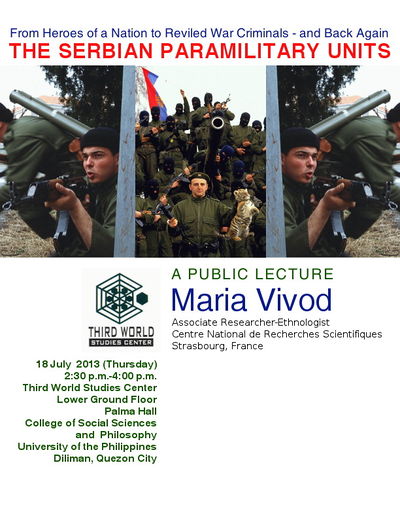 
About the lecture
Little was known in Serbia how many paramilitary units existed and were employed in the conflicts in Croatia and later Bosnia and Kosovo. In 1994, the United Nations Security Council reported that in the conflicts in the territories of the Republic of Bosnia and Herzegovina (BiH), the Republic of Croatia, and to a lesser extent, the Federal Republic of Yugoslavia, 82 “paramilitary organizations” were deployed. In the first years (1991-1999) of the armed clashes that accompanied the decomposition of the socialist Yugoslav Federation, in a relatively short time the ‘guys’ from various paramilitary units that were given ample media coverage in the national media of the 1990s suddenly turned from ‘good’ into ‘bad’. Formerly seen as heroes, widely exploited in the Milošević-era, a decade after the conflict they have fallen into oblivion: only few perpetrators were prosecuted in the mean-time for war-crimes and the actual role they had played in various war crimes and the genocide is still unknown to the Serbian public, Immediately after the fall of the regime, it has been discovered to the public that they had abused their power, the situation and status of ‘protectors and heroes’. For a part of the population, they remain the symbol of everything that was wrong with the Serbian government and its elite during the 1990s. However, due to last year’s come-back of the warmongering nationalists of the 1990s who won the elections, the former ‘heroes of the nation’ have regained their place in the Serbian historical narrative as the undisputed heroes of a lost cause, keeping their status as role-models of the young generations.

This page has been accessed 1,565 times.