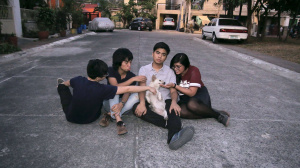 Oh, Flamingo! is and indie rock outfit that strives for the eccentric. Armed with melodic hooks and an idiosyncratic approach to songwriting, their music explores the familiar and the oddly unfamiliar, and is definitely a sonic treat - both in live performances and recordings.

The group was formed in late 2013 and is composed of Howard Luistro (vocals/guitar), Billie Dela Paz (bass), Pappu De Leon (guitar), and Fries Bersales (drums). The four met in the The UP Music Circle, one of the university's music organizations. Despite being relative newcomers to the music scene, the band has already played in various productions and bars all over the metro, delivering tight live performances directly to gig-goers.

The band has gained a fair amount of attention and has been featured in articles on Young Star (Philippine Star), Vandals on the Wall (VOTW), Pinoy Tuner, Radio Republic, and Spot.ph. Their single "June" also gained regular airplay on Jam 88.3 after being part of its program, Fresh Filter, on February of 2015.

Aside from regularly playing shows every month, the band is also known for their video blog, Bird Watching.

Plans of releasing an EP have been dated mid-2015.

This page has been accessed 971 times.