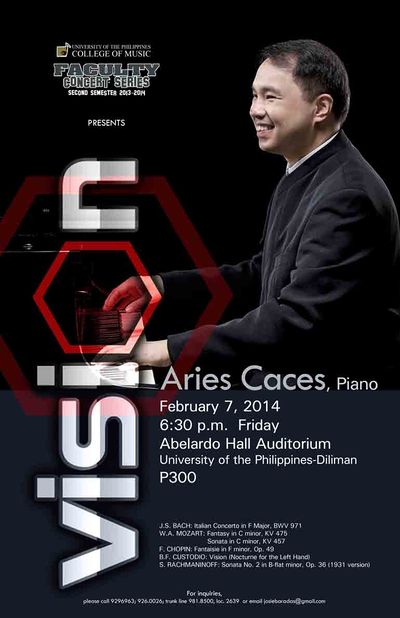 Visiting pianist Aries Caces, a Filipino who is currently teaching in Vienna, Austria, is performing inAbelardo Hall Auditorium on Friday, February 7, 2014, 6:30 pm. The concert is part of the on-going season for second semester AY 2013-2014. In the mostly classical music repertoire for the evening that is his specialization are J.S. Bach’s Italian Concerto in F, BWV971, W.A. Mozart’s Fantasy in C minor KV475, Sonata in C minor KV457, Chopin’s Fantaisie in F minor op. 49, and S. Rachmaninoff’s Sonata No. 2 in B-flat minor, op. 36. The Concert is entitled “Vision,” the name of a rare piece, a nocturne for the left hand, by B. F. Custodio that will mark the concert program.

Caces was first taught by his mother and, later, by Feliza Custodio, Ernestina Crisologo, and Bernardino Custodio. In Vienna (Hochschule für Musik und darstellende Kunst), he was a student of the eminent Paul Badura-Skoda (a specialist of Mozart, Beethoven, and Schubert) and Roland Keller. Later he studied with Georg Ebert (piano chamber) and Uros Lajovic (orchestral conducting).

This page has been accessed 1,332 times.