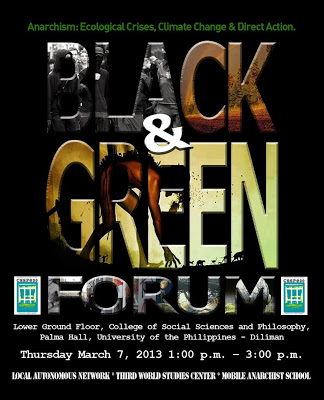 Massive extraction of fossil fuel for power; clearing out of forest areas due to logging and mining; harvesting marine and fresh water resources beyond sustainable level and polluting the entire global ecosystem. It is common knowledge that the driving force of massive productions of commodities is the interests of the corporations to gain more profit. Climate change is one, if not, the greatest threat caused by these ecological crises. The huge volume of greenhouse gases deposited in our atmosphere trapped heat from the sun, global temperature increases have affected weather patterns, sea level has risen and oceans have become warmer. These changes induced life threatening phenomena, such as occurrence of extreme tropical cyclones and torrential rains with huge amounts of water.

Peter Gelderloos noted in his essay “Before the Big Change” that already 300,000 people die every year due to the results of climate change, such as desertification, droughts, more violent storms, greater spread of tropical diseases and crop failure. Majority of the victims were from the global south.

Initiatives have been varied—different sectors and institutions work, discuss, argue, and collaborate. Billions of funds have been transferred and circulated to finance projects that are related to climate proofing initiatives. Some advocates are working at the top level and set to engage international institutions like the United Nations (UN) Intergovernmental Panel on Climate Change. Some are at the national level and there are groups who are active at the grassroots level. Based on many discussions organized by NGOs working on this issue, increasing capacities of communities involve huge resources and the process of popularizing this to encourage people to participate is another thing.

Since the Kyoto protocol took effect, there is no significant reduction of carbon emission done by nations and corporations who have huge contributions to greenhouse gases. The UN programme on Reducing Emissions from Deforestation and Forest Degradation in Developing Countries (REDD) on the other hand is another clever attempt to protect the operations of corporations. REDD is also known as the “offset” scheme of the carbon markets and in effect will produce carbon credits. With this scheme, corporations do not actually reduce emission—they just buy carbon credits.

At the community level, the families remain vulnerable to unpredictable changes in our climate and it seems that the advocacy on climate change has become an industry based on fossil fuel and reinforces privilege to the few who control resources and decision-making instruments.

Based on tested climate models and various simulations exercises, the issue on climate change is urgent. The said climate models suggest that within ten years if the trend of emission will not be reduced, warming will be at 20 degrees Celsius—enough to melt polar ice caps that reflect large amount of solar radiation. The melting of Siberian permafrost will release methane—more potent than carbon dioxide. Water vapor will increase in the atmosphere that could trap more heat from the sun. The cumulative effects will culminate at the end of the century which will raise global temperature by five to six degrees.

Thus, looking for a long term solution is in our best interest. Despite the unequivocal reality of climate change, it is still a great challenge to us to find common actions and alternatives. Ecological crises and its immediate and long term effects are just mere manifestations of the core problems, which is the control and domination of corporations and states. Moreover, the mainstream economy is working not to provide diverse needs of the people. It is not built to promote equality and sharing. The capitalist system is designed to realize profit by controlling ecological systems and subjugating people and community in order to control benefit streams. Economists are working on hard facts to monitor, study and analyze the economy but its general direction is basically abstract because growth has infinite combination of figures while natural resources and people are limited and has physical limits. The economic system and the natural systems of the earth where human beings are organically tied to are incompatible. The over-all direction of capitalism is to consume the earth to its last living organism for profit.

OBJECTIVES In the aforementioned context, this forum aims to:

PHOTOS FROM THE FORUM

This page has been accessed 2,717 times.