Difference between revisions of "UP Sunken Garden"

A. Background
The General del Pilar Parade Grounds is the official name of the Sunken Garden, as it is popularly called. It is a five-hectare area of vast land—which is able to serve almost three football fields—and is the largest vacant land in the Diliman campus where various outdoor activities can be performed. It was basically, a basin and is believed to sink every year since it lies in a fault line. Because of the water spring that originates from it, the Sunken Garden used to be half-submerged in water.

B. Surrounding Buildings
The UP Sunken Garden is surrounded by a number of buildings:
To its North lies the Malcolm Hall—College of Law
To its South lies the Benitez Hall—College of Education
To its East lies the Vinzons Hall (where one has an exact view of the Garden) and the College of Business Administration
To its West is the Gonzales Hall—University Library or Main Library

C. Surrounding Artifacts
Aside from the buildings, the Sunken Garden is also circumferenced by artifacts like the following: 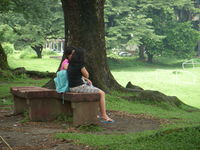 
Here in the Sunken lies the Grandstand that provides an overlook of the five-hectare expanse. The old Grandstand is a box-like structure that resembles to a torii—a gateway of a Shinto temple. It is a long open one that looked like a waiting shed. Architect Froilan Hong’s modification of the initial design transformed the box-like structure into a pyramid-design one with a red roofing and four-angled pegs. The new Grandstand accentuates the vast empty space of green grass.


1. Cadena de Amor Festival
Cadena de Amor is a lost student tradition of UP sponsored by the UP Woman's Club. It was introduced in 1934 by Ursula U. Clemente. The annual ritual gathered both junior and senior year coeds who linked themselves in massive human chains by passing cadena de amor garlands. The ritual symbolized the turning over of responsibilities from seniors to juniors. The ritual was well loved and was called "the festival of girls and flowers". The student reception changed radically in the 1960s when UP students began to question the relevance of such traditions especially against the turbulent and violent times. Many viewed the ritual as degrading, since it had passed from being an annual leavetaking ceremony to a beauty contest. Because it was seen as "burgis" or bourgeois, the ritual was last held in 1968--a year that led to the turbulent events of the First Quarter Storm.


2. ROTC
The General del Pilar Parade grounds is where ROTC Cadets undergo their Citizens Military Training or CMT. Every weekend, a large gathering of males stand and march in the field for hours. It is also the venue for the annual presentation of corps sponsors at the end of first semester.


3. Latagaw Cup
Through the year, the Sunken becomes a venue for a lot of sport activities and festivals. One of which is the Latagaw Cup , a soccer event competed by various student organizations inside the University of the Philippines. Philippine indigenous games are also held here as part of the celebration of the UP Diliman Month during February.

E. Interaction with People
Five hectares of grass, just think of the things you can do in it. Why not turn it into your personal writing pad like some ingenious people. They used crumpled newspapers to form words like “Happy Birthday....” or “I love ….”as their mode of expression. The Sunken Garden is also used as an extension of the library. Students find peace and quiet to study here or to simply relax. During summer, you will see Frisbee throwers, kite flyers with kites of different shapes and sizes all over the field, people having picnic together. You will also see father and son or the whole family playing catch. Sunken Garden is infamous for its nightly liaisons. Even during daytime, you will find couples having their sweet time here. The UP Sunken Garden equates to many things to different people.