The UP Samahan sa Agham Pampulitika (UP SAPUL), formerly known as UP Political Science Club, is an academic, non-partisan, CSSP-based and socio-political organization aimed at advancing Political Science as a discipline and field of study. It is a university-wide organization in the University of the Philippines - Diliman Campus and is thus open to all students interested in political science. Its maxim, “Tungo sa Pinakamataas na Antas ng Paglilingkod!”, speaks of the service-oriented and socially conscious character of the organization. Members of the organization are called SAPULISTAs.

When UP Samahan sa Agham Pampulitika was founded in 1930, it first took the name “Political Science Club (PSC)” with the objective of further studying and analyzing the then timely issues that occurred, thus focusing on a more academic orientation. And due to this reason, only students of Political Science were allowed to join the said organization. But as time brought challenges, the organization also began to adapt to these changes.

In the 1960s, the strong sense of nationalism that prevailed in the country became the organization’s guiding principle. Its ideology was drawn along the lines of national democracy. Hence, during the time of Martial Law, UP SAPUL did not allow that this military rule hinder their right to organization. With nineteen other organizations, they fearlessly fought for freedom. After the Filipino people emerged triumphant over the dictatorial regime, TANGLAW, the newsletter of UP SAPUL, was the first to be published in the university preceding even the Philippine Collegian. This, however, is not the only instance that UP SAPUL rode with the tides of change.

With the organization’s renaming from Political Science Club to Samahan sa Agham Pampulitika, as it is now known as, it has become not only academically-oriented but socio-political as well. Since then, it has also accepted members from a wide array of colleges and degree programs. Nevertheless, the principles behind SAPUL – pluralism, critical thinking, duality of theory and practice, enlightened activism and academic excellence - remain steadfast.

Indeed, for 84 years and counting, UP SAPUL has aimed not only to be a successful academic formation but more importantly, a true institution of service in our society.

The Executive Board and Standing Committees 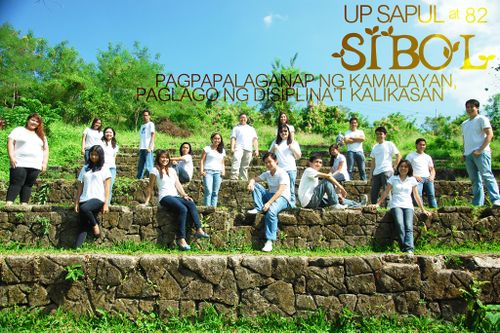 UP SAPUL on its 82nd Anniversary

Notable alumni of the UP PSC/SAPUL include:


Among UP professors and administrative staff, included in the list are: 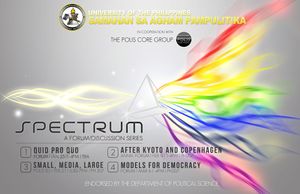 Membership
At the start of every semester, UP SAPUL schedules a Grand Orientation for students who wish to apply for membership. Though the organization is based in the College of Social Sciences and Philosophy, it does not limit its membership to the CSSP studentry. Students from different colleges and units all over the University of the Philippines and who have a keen interest in political science are welcome to apply.


In line with its nature as an academic organization, UP SAPUL consistently conducts fora, lectures and discussions relevant to the discipline. For it's 82nd Anniversary, UP SAPUL launched "SPECTRUM: A Forum/Discussion Series", which was grounded on the areas of Political Science and aims to re-examine what are otherwise taken for granted concepts, theories, ideas, and issues which generate social, political, and economic impact.


UP Samahan sa Agham Pampulitika organized the first ever Model United Nations conference in the University of the Philippines - Diliman last January 25-26, 2014.

Model United Nations conference is a student activity that provides an educational simulation of international politics and diplomacy. Participants of Model United Nations conference play the role of a given country's diplomat within an intergovernmental body. The conference is divided into different committees. Examples of which are the Security Council, Disarmament and Security Council, Human Rights Council and a lot more. Each committee is assigned to deliberate and resolve the most urgent issues confronting the international community.

The logo is comprised of the torch, the anvil & hammer, and the chain. The torch symbolizes the blazing ideals and aspirations of the organization guiding the formation of a new and progressive attitude forged by the anvil and hammer. The chain represents the formidable linkage of theory and practice.