Difference between revisions of "UP Samahan Tungo sa Progresibong Administrasyon" 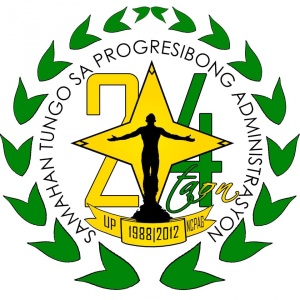 The UP-STPA is a university-recognized socio-academic student organization based in the National College of Public Administration and Governance (NCPAG) of the University of the Philippines in Diliman. It was founded on the 26th of November 1988 by eighteen Public Administration students who were the first to enroll in the then-newly reinstituted Bachelor's Degree program which was abolished in 1968.

For the past twenty years, the UP-STPA has dedicated itself to the service of the Filipino people through the utilization of Public Administration as an effective and systematic tool in providing a humanistic and nationalistic oriented public service that is accountable and credible.

UP STPA is committed to promote Academic Excellence in its members. In line with this, symposia, lectures, seminar workshops, and forums such as Course Appreciation Program, Project Mgmt. Workshop and Public Speaking & Debate Seminar are given to STPAers and other UP students to encourage them to give more importance to the education they are privileged to have.

As students of Public Administration, STPAers believe in the strength of the people to influence change and progress in the government. Public Lectures, Debates, Voter’s Education, Discussions and Film Showing of issues concerning Filipinos such as Fiscal Crisis, Government Reinvention, and Poverty are held to further develop critical awareness in them, hoping that they be future advocates of change of our country.

Outreach Programs, Medical Missions and Book Sharing for urban poor communities & indigenous groups, also Leadership Trainings and Self development workshops for Public High School Students are held each semester to help our less fortunate brothers and sisters and to give STPAers the chance to serve the Filipino people making UP STPA an effective and efficient training ground for future public administrators.

This dedication has led to the organization's recognition by the University of the Philippines as a two-time Gawad Chancellor Awardee for Best Student Organization in 1996 and 1997, respectively. Still, the UP-STPA's task of creating a much better Philippine society continues - it is a commitment that we will carry on to the future. This is the UP Samahan Tungo sa Progresibong Administrasyon.

This page has been accessed 4,672 times.