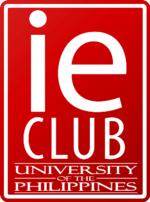 We direct our passions into developing our members into holistic individuals through programs implemented the IE way that promote academic excellence, social responsibility, transformative leadership and self-mastery.

We aspire to be the premier youth organization that develops in its members the passion to learn, to lead and to serve for the development of the community around them.

The UP Industrial Engineering Club (UP IE Club) was founded by a group of pioneering students on 09 December 1967, with the aim of serving the different needs of the then growing IE populace, and of preparing its members to render future service to the immediate community and the nation.

Since then, UP IE Club has grown to be the largest organization in the College of Engineering, having no less than 200 members each year. The UP IE Club members excel both in academic and in extra-curricular endeavors, while devoting effort into the improvement of their immediate community. The organization continuously produces honor graduates and winners of different competitions, like the Engineering Marketing Congress (EMC) and the Philippine Emerging Start-ups Open (PESO). Since the start of EMC in 2005, entries by UP IE Club members have consistently won the over-all championship and other special awards. Members also hold significant leadership positions in other organizations, such as in the University Student Council, the Engineering Student Council, and various auxiliary committees of the college, such as the Career Assistance Program for Engineering Students (CAPES), the Engineering Registration Committee (RegCom), and Inhinyero.

UP IE Club received the Engineering Organization Excellence Award (EOEA) in 2007, and has also been awarded the title Engineering Week Over-All Champion (EWOC) twenty-one out of twenty-four times. The organization is also involved in socio-civic projects like orphanage visits, care for the children under DSWD and specialised hospitals in Metro Manila, renovation and refurbishment of public education facilities, and building of housing for the homeless. UP IE Club continues to provide free tutorials to public high school students in Quezon City in preparation for college entrance exams since 2003, during which the organization was accredited and awarded by the National Youth Commission as one of the Ten Accomplished Youth Organizations (TAYO). This year, UP IE Club’s Scholarship Fund has come to its completion in sponsoring an incoming freshman for the school year 2010-2011 as a response to tuition fee increase (TOFI) which has deterred less-fortunate students from pursuing an IE education in the University.

UP IE Club members continually come up with creative ideas to address issues in the department, college, university, and the national levels. In the 2010 Engineering Organization Recognition Rites, UP IE Club was highlighted as the organization with the most projects undertaken. Most importantly, these same members excel in their academics, and are often found leading their colleagues – be it in research, in critical thinking, or in values.

Truly, after 42 years of productive and meaningful existence, UP IE Club maintains its status as the premiere organization of the College of Engineering and continues its traditions of integrity, compassion, and above all, excellence.