Difference between revisions of "UP Geodetic Engineering Club"

Proficiency and Competence through Camaraderie 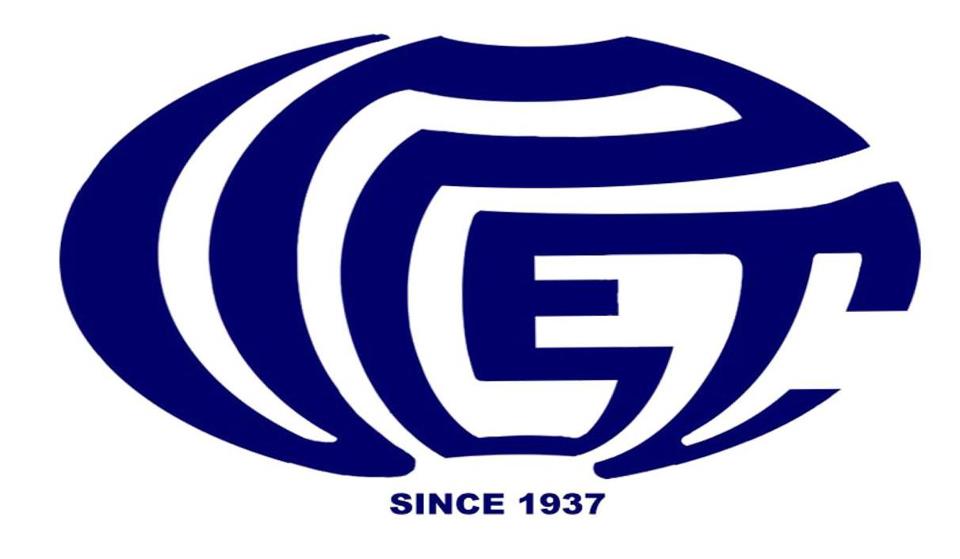 The U.P. Geodetic Engineering Club is an academic organization duly recognized by the College of Engineering of the University of the Philippines. Since 1937, UPGEC has always been at the forefront of promoting academic excellence and camaraderie among its members, the faculty, and staff through activities that foster the advancement of geodetic engineering and science.

The year after the establishment of the U.P. Department of Geodetic Engineering under the School of Surveying in the University of the Philippines-Diliman, in June 1937, marked another monumental event. On the U.P. 4th floor hallway on East/Vila Wing of Melchor Hall, leading to UPGEC's tambayan (MH 428), Geodetic Engineering Club was born, on August 15, 1937. Since then, the club continuously abides to its goal of meeting both the challenges along this field of study so as to promote proficiency and competence as future engineers, and of bringing togetherness and companionship among the young Iskolars bound not only of the same course, but of that sole dream - nation empowerment.

The UP Geodetic Engineering Club has proven its existence. During the first half of the year, it celebrates its Anniversary with a Holy Mass, Open Tambayan, Alumni homecoming, exhibit, and lectures and symposia. The month of December is one of the most awaited season in the College of Engineering as it holds its annual Engineering Week., where the club sponsors the GEOID CUP, an inter-organization chess tournament. There is also the VOLLEYBAGAN, the Engineering Week Volleyball Tournament where players from participating organizations all over the university bang their heads off for the crown. And just last year comes the revival of the club's participation to INDAKAN, a dance competition and AWITAN, what else but a chorale competition. This just proves that the club has so much talent to showcase.

Usually towards the end of February or early March, the club goes all-out for one week as it celebrates the G.E. DAYS, in cooperation with the Department of Geodetic Engineering. There are also several fundraisers such as food sales, film showings (e.g. "Jurassic Park", "Addam's Family, "Of Love and Shadows"), flower sales, fund runs and raffles.

The club offers all these and more . Through the years, it has for many reasons remained one of the pillar organizations in the College of Engineering. As it turns 75 this year, the U.P. Geodetic Engineering Club continues to play a major role in the upliftment of quality and excellence through its resident members, alumni, and applicants.

As far back as the Spanish regime in the Philippines, there were people who performed land measurements. They were called agrimensores. But these agrimensores were equipped with nothing but compass and tape, thus the questionable accuracy of their surveys led to controversies-some not yet resolved to the present day. So when the Americans came, a new government unit was organized-the Bureau of Public Lands which was staffed at the top by Americans.

The first American Director of Lands was Charles A. Sleeper. When F.B. Harrison became governor general, he adopted the "Filipinization" policy. Vicente Mills became the first Filipino Director of Lands.

The Bureau then established a surveying school which was on the same grounds as the Philippine School of Arts and Trades. The school offered scholarships to students for its two- year surveying courses, after which these Bureau of Lands "pensionados" or scholars had to serve the government.

Then came the depression. In 1932, the Bureau of Lands suspended sending pensionados. However, the School of Surveying-College of Engineering agreement still held. There were non- pensionado students and some "stragglers". Then in 1936, the Bureau of Lands restored sending pensionados. These scholars were selected through a nationwide competitive examination. It was then that a surveyor and civil engineer, Professor Maximo LAchica began to advocate the elevation of the surveying course to the 5-year Bachelor of Science on Geodetic Engineering courses, this proposal and curriculum was approved in the early part of 1937.

Through the years, the club has played a major role in the development of friendship and companionship among GE students in the university. We, the members, are not just people thrown together by the same course, we are part of one big, happy family who are always there to help and support each other through the rigors of college life.

Now, 75 years after our foundation, the Geodetic Engineering Club with its goals, aspirations, and ideals, lives on, thriving in the hearts of all who are part of it.

THE EXECUTIVE COMMITTEE The think tanks of the club. They get more than their share of headaches.

An EXECOM meeting is a study on the beauty of integration. Since its members head the existing committees, individual plans are organized and welded into one whole coordinated affair.

The chameleons of the club; watch them change colors. They appear normal (harmless even) during the first half of your application period, but come the eleventh hour and they change into masters of intimidation. (Har har…) It is their job after all, to screen applicants (they are sticklers for the saying "Diamonds are coals that have survived tremendous pressure"). But be not afraid. They are, on the other hand, considerate (really!), and they recognize dyed-in-the-wool applicant when they see one.

If not for the shocking ad campaigns, CK's probably would not sell. And if not for the PUBCOM's commitment to responsible information dissemination, GEC wouldn't have a label. They are on a constant ad campaign to promote the club. Their fortes: authentic teasers, posters, banners, profiles, exhibits (and the handy primer!). Not only that, the PUBCOM handles the club's official newsletter the "Polaris". Perhaps, they give the club the "character". (Now, how's that for a cliché!)

Their hands, their (beautiful, and creative, of course!) minds, their one-of-a-kind skills and talents, their commitment, and the exceptional service they render to the whole GEC community - the Publicity Committee has so much of what it takes to have that prized one that you call trust.

THE FINANCE COMMITTEE Your ever friendly banking committee "Pay up dirtball!"

The committee who does most of the dirty work (e.g. getting members to pay up), the Fincom is also the most in-demand (money is after all the blood of every org).

The epoxy of the club, because they hold the club together. Among the activities handled by the Internals are the sportsfest, team building seminars, get-togethers, gimmicks, sem-enders, etc. The Internal Committee members are probably amateur psychologists; for cooking up activities that would transform each of the individual personalities (weirdoes, colorful, bland, boring, apathetic, what-have-you's) into a working machine. Bold text Internal not only sees to it tat the family atmosphere is healthy, it also is in charge of maintaining the cleanliness of our tambayan and maintenance of the facilities.

THE EXTERNAL AFFAIRS COMMITTEE "It's a big world out there, glad to keep you in touch."

Our tambayan may be up and away from the other Eng'g orgs, but that doesn't mean we are stuck here all by our lonesome. The External Affairs Committee's job is to keep us in touch with the other university and college organizations. They handle the usual Inter-organizational activities such as sportsfest and other Eng'g Week activities. Ties with the alumni are also strengthened with the Externals initiating get-togethers (e.g. through basketball games, parties, etc.)

THE ACADEMIC AFFAIRS COMMITTEE The ever dependable tutors and librarians (?)-"Need help?"

When you feel that only Divineintervention can make you pass the subject,try your last link of defense - your friendly and approachable Acadcom members. They are the cerebral powerhouse of the club. The ones in-charge of all the library and academic files. If you need sample exams, books, or even an hour or so of tutorial, they are there for you. Your Acadcom sees to it that you do not have to take ES 11 or Physics 71 n times (where n ranges from 2 to infinity).

THE MARKETING COMMITTEE The official feasibility, solicitation, and follow-up committee

This is the latest addition to the EXECOM (it's not even in our constitution yet), is not to be confused with the Fincom. The jobs they do include choosing companies that will be potential sponsors, faxing those companies or talking to their representatives, and doing other solicitation work. The creation of this committee certainly took a huge load off the Fincom's back.

Block Handling - The Club yearly participates in the Freshmen Orientation Program (FOPC) wherein we are given GE freshmen blocks to orient and guide in their first few days in the university. This is where they get to know their blockmates, elect their block officers, eat free snacks at the tambayan, have a quick tour at the department and get to see and interact with a transit for the very first time.

Course Orientation - GE Club conducts course orientations in July. This activity helps new GE students other than freshmen to get to know the course better with instrument demonstrations, laboratory tours and talks with faculty members.

Applicant's Orientation - July is the start of the application period for the club. People we lured to join especially from the orientations get to have free snacks again.

GE CLUB ANNIVERSARY - This year, we are celebrating our 75th anniversary and the list of the week-long activities include:

Application Interview - A part of the application in the organization is the interview where wanna-be members undergo a series of questionings from the Membership Committee of the Club. As an applicant, you'll learn to value and love the organization and its members from this activity.

Final Rites - The last stage of the application usually takes place a week before the final exams. This is how the GE CLUB family grows.

Sem-Ender - After a grueling semester with academics and organization activities, the Club takes a break outside town sometimes swimming, mountain climbing and what-not.

Ms. GEC - The men of the Club always looks forward to this activity because whoever wins the title, gets the prestige and honor of becoming the org's representative in the Ms. Eng'g. competition held during Engineering Week.

Engineering Week - The Club hosts the Volleybagan (a volleyball competition) and the Geoid Cup (a chess tournament) during this month. Members also join and contend with other Engineering-based organizations in other events like Awitan and Indakan, Smoker Night and the Ms. Engineering.

A Pair To Remember - During love month, the club picks a lucky couple to go on a date sponsored by the members of the club.

Sem-Ender - GE Club family never ends the semester without renewing bonds and friendship with each other. That's why we are envied and looked-up to.

You may visit http://www.upgec.org/index.html to know more about the UP Geodetic Engineering Club.
Also, visit our Facebook page