UP College of Law

The printable version is no longer supported and may have rendering errors. Please update your browser bookmarks and please use the default browser print function instead.

A Brief History of the Law School

The Board of Regents of the University of the Philippines formally approved the establishment of the College of Law on January 12, 1911.

The College, however, traces its beginnings to the law courses opened in 1910 by the Educational Department Committee of the Young Men’s Christian Association (YMCA), through the efforts of George A. Malcolm who was later to become the first permanent dean of the College. In June 1911, the College was formally opened with first and second year classes. There was a total of 125 students comprising freshmen and sophomores, the latter numbering fifty when they started the YMCA school. Of this first law class, one became a President of the Philippines, another, a Chief Justice of the Supreme Court, while several others became legislators and legal luminaries. 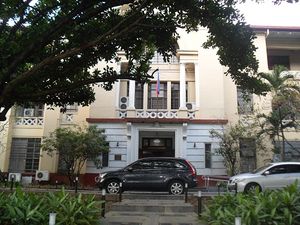 UP College of Law

The faculty was at first predominantly American, but the faculty profile changed when the American teachers were supplanted by Filipinos. Sherman Moreland, Justice of the Philippine Supreme Court, was Acting Dean from July 1 to October 11, 1911; George Malcolm was Secretary and subsequently Dean until 1917 when he was elevated to the Supreme Court. Jorge C. Bocobo, a member of the 1911 faculty, succeeded Dean Malcolm and became the first Filipino dean of the College. He held that position until 1934.

By its twenty-fifth year, the enrollment in the College of Law totaled 547 students and the faculty was composed of eight full-time and nine part-time members. A graduate program leading to the Master of Laws degree had been established; two earned the degree in 1918. Classes were then held in Palma Hall on the Padre Faura Campus in Manila and the greater number of students attended day classes. Evening classes were maintained for students who were employed during the day.

Dean Jose A. Espiritu was appointed in 1934 to succeed Dean Bocobo. Upon the outbreak of the war in 1941, the College was closed and classes did not resume until August of 1945. Returning from a brief stint in the Supreme Court, Dean Espiritu commenced the difficult task of rehabilitating the College.

In December 1948, with the transfer of the main campus of the University of the Philippines to Diliman, Quezon City, the College was assigned first an army hut, and later, a three-storey building named Malcolm Hall after its founder and first permanent dean.

Purpose and Functions of the Law School

The University of the Philippines College of Law is an institution acknowledged for its continuing commitment to academic excellence and service to the public. This recognition is the product of an ongoing effort to transform itself so that it can be a catalyst for change in our legal institutions.

The transformation of the College has been from a professional school to a law complex with a triad of functions: 1) instruction, 2) research, and 3) extension service. The change has its bases in that the College is an institution maintained by the people, and it must serve the people by being responsive to the growing legal and other law-related needs of all Filipinos.

Thus, the legal mandate for the Law Complex spells out its role as a resource for the legal development of the nation:

“The U.P. Law Complex as an integrated system of national legal institutions within the University of the Philippines shall be dedicated to teaching, research, training, information, and legal extension service to ensure a just society. It shall always be responsive to the challenges of social change, and shall be relevant to the growing legal and other law-related needs of the Filipino people.” (1021st Meeting of U.P. Board of Regents, May 29, 1989). The Law Center was integrated into the College in the reorganization approved by the Board of Regents in 1989.

The objectives of the College (including the Law Center) have been restated thus:

1. To discover and transmit knowledge of the law so as to achieve distributive justice for all.

2. To train students for the practice of law, instilling in them the ethical responsibilities of the legal profession and the social responsibility to work for the attainment of a just and humane society.

3. To contribute to the improvement of the legal system and the quality administration of the system of justice in our society for the full protection of human rights.

4. To train lawyers for leadership that is innovative and responsive to the needs and aspirations of the Filipino people.

5. To develop a new level of legal education with a view to enhancing knowledge of the law on the part of the citizenry, and as part of general education.

The purpose is to produce lawyers who are not only superior legal craftsmen but also socially conscious leaders who will promote the public interest above that of individual clients and pressure groups. This can be achieved only by viewing the law as part of the social process and by studying it in relation to related social services and disciplines.

The Law Center is composed of 4 institutes created in 1989, namely: