Difference between revisions of "UP Babaylan" 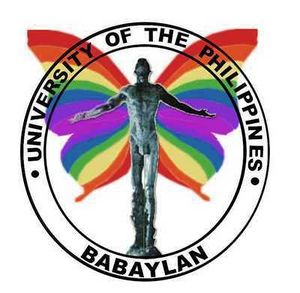 The University of the Philippines Babaylan is the leading gay, lesbian, bisexual and transgendered (lgbt) students' support group in all campuses of the State University.

UP Babaylan is an organization anchored on the belief that all persons should be equal regardless of race, nationality, religion, sex, or sexual orientation. The organization is aware of the state of marginalization of homosexuals in the university, in particular, and the country, in general, instituting activities aimed at fostering social acceptance of homosexuals. The Organization aims to serve as the medium through which rights and welfare of homosexual students are advanced and defended. The Organization unites with the various sectors of the university and the country in pursuit of a humane, just, progressive and democratic society. Toward this end, the Organization endeavors to create linkages between itself and other organizations and institutions which share its principles and objectives.

The Organization is engaged in advocacies that protect the rights of the LGBT communities inside and out of the University of the Philippines.

Currently the Organization is involved in the following Campaigns:

In pursuit of its goals as a support and advocacy group, UP Babaylan undertakes a number of activities, to wit:


Service to the University and Society UP Babaylan has established a niche among the students of the University if the number of invitations to speak in symposia, conferences and classroom discussions is any indication. This is not confined to UP alone. Other schools in the Metropolitan Manila have invited the organization's members to speak before their students. They are also invited as panelists and resource persons in television and radio programs as well as featured in various publications. To top it all of, the organization is comprised of top caliber artists and expressionists.

Recruitment and Reaffirmation Week The two week recruitment week takes place at the AS Walk, where a sign-up booth is usually being set up. At the sign up booth the members of the Organization never failed to entertain passers by with gimmickry and antics UP students love. During the recruitment week the members of the Organization also conduct random lectures on gender issues and information campaigns on the developments in the lgbt community. Flyers containing texts on the Anti-Discrimination Bill or House Bill 2784 were given to passers-by.

Applicants' Night A night full of celebration as the Organizations alumni gather together in a night of festivity. The applicants prepare a series of skits and playful melodies of dance and song. Food usually brought by the members and the alumni is shared by all. It is also during the Applicants Night when the applicants are given their Babaylan names.

Gender Sensitivity Workshops A series of workshops focusing on gender, sex and sexuality issues is conducted around the University. Participants submit themselves to a grueling five hour intensive and integrative program facilitated by the volunteers from our trained partners from TLF and TFP. It is through these workshops that we produce informed and open minded students of the University. The last year alone we were able to open the minds and inform around at least 100 students from the Asian Institute of Tourism and Kalayaan Residence Hall.

University Educational Discussions (ED's) Not far from out vision of a University free from discrimination and fallacies, we conduct a series of education discussion where the applicants of the organization and their peers are allowed to interact in our peer-facilitated forums and seminars. There were about 500 students from the University who attended our educational discussions. The discussions involved modules and task-oriented workshops which handled issues on the following topics:

Androgyny ANDROGYNY is the culminating activity of a month long calendar of events geared towards the celebration of Babaylan's anniversary. It is also annual event anticipated by both the UP community and the community at large from all walks of life. It is basically a motley of art expressions in dance, songs, theater and comedy showcasing top rate entertainment. Featured in the performance are the members of the organization who, through the years, have honed their respective talents under the auspices of noted artists in the various fields of the performing arts.

Lantern Parade Aside from the lantern entries from the College of Fine Arts, what else is highly anticipated during the Lantern Parade? Yes, you are right, it can only be Babaylan. The yearly participation of Babaylan raises controversies as we never fail to make statements and leave the audience in awe. Always clothed in habiliments of vivid expressions for anti-discrimination and strong sense of Christmas spirit, Babaylan

Festibam It was National Lesbian Day. For seven years now the local LGBT (lesbian, gay, bisexual & transgender) community has been celebrating Lesbian Day and each year happens with a different concept. The 7th year was celebrated in a complete festive mood. There was a bazaar and an exhibit. The challenge for the participant-organizations was how to make each booth particularly interesting to the general public passing-by.

Festibam was a 100%-out-and-proud day for Filipino lesbians. The lesbian organizers chose a strategic venue where the general public would have a glimpse of our community. Our lesbian egos were bared to confront the wits of the morning joggers and afternoon strollers. And this challenge was suffice to expose in exponential degrees of how the modern Filipino lesbian looks like and acts in public.

Pride March – Philippines The whole world danced in one song. UP Babaylan helped TFP, the official organizer of Pride March Philippines, through manpower and ideas on how the Pride March this year should be celebrated. UP Babaylan will be spearheading the student and academic arm of Task Force Pride March. We will be in charge of the alliance of lesbian, gay, bisexual and transgendered student organizations in the Philippines, a position we highly humble ourselves of.

UP Fair The yearly event of the University was once again supported by the Organization by hosting a booth during the six day celebration. We sold food and beverages from which the proceeds will go to financing our projects.

USC Elections The University Student Council Election is a very humbling experience for the organization. It also serves as our gauge to the level of the University’s acceptance of our LGBT community. The organization received numerous criticisms and a continuous flow of disrespectful articles from a student publication, but we never cowered before them. We remained proud of our lineage and legacy as our alumni were at their times. As anti-government student organizations continued to feed and instill homophobia in the minds of the University’s scholars, we remained clear with our goal, we remained focused on our ideals, and that is to win the elections fair and square. We are proud that we ran the past elections not at the expense of other candidates but with only our vision steadily lifting the butterfly wings of our ideals.