Sampaguita Residence Hall, situated along Quirino Avenue across the Zoology building and adjacent to the Kamia Residence Hall, was in June 1957 referred to as the UP Women's South Dorm II. Three years later, it was known as Halcon Hall, when acting UP President Virata designated it as such. It was only in 1962 that its present name was adopted. Mrs. Luz D. Padilla, the matron who had gone through the nine-year period during which the dorm's name was changed several times, handed over the administration of the dorm to Miss Carmelita Ynares, who opted for a two year term. Miss Erlinda N. Acosta took charge of Sampaguita Residence Hall in September 1967. Presently, Mrs. Teresita Ngayan manages the dormitory. 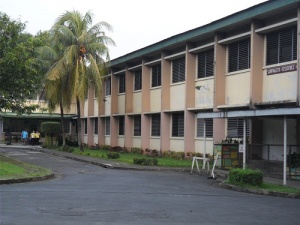 The two-story dormitory exclusively houses female upperclassmen of UP-Diliman. Rooms are adequately furnished for 284 residents, with four students sharing a room. At the reception hall, there is a television set, a stereo and a piano for the residents. Two refrigerators are also available for use.

There is a basketball court at the back of the dorm where dormers' sports fests are held.

Badminton sets, and table tennis rackets are available from the Sampaguita Residence Hall Association (SAREHA) House Council at minimal fees, which are used for maintenance purposes.

A noteworthy project financed by the SAREHA Association in 1967 is the covered walk from Sampaguita to Kamia. A few years later, at the height of student activism, Sampaguita Residence Hall served as headquarters for certain student groups. Sampapel, the dorm's official organ was then known for being vocal about the true sentiments of the people but has in recent years gone out of print due to financial constraints and lack of staff.