Youth for IT Logo

Y4iT’s precursor, the 2003 National IT Student Congress held on September 2 and 3 at the University Theater in UP Diliman, Quezon City, attracted at least 5,000 participants from all over the nation. Attendance has been steadily increasing, benefiting from an increasing number of lectures.

Y4iT 2008 was held in UP Diliman, Quezon City from September 2 to 5, 2008 at the University Theater and UP Film Institute for the Main Event, and UP Ang Bahay ng Alumni for the Sponsors Exhibit. An estimated 18,000 delegates (senior high school and college students, IT professionals, members of the academe, and IT enthusiasts) from all over the nation attended the four-day event. Here are some of the featured topics: 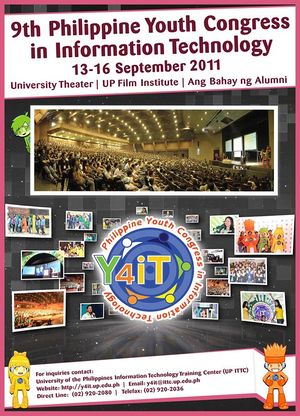