Kontemporaryong Gamelan Pilipino is the resident ethnic music and dance ensemble of the College of Arts and Letters, UP Diliman. Popularly known by the acronym KONTRA-GAPI, the group was founded by Art Studies Professor Pedro "Edru" Reyes Abraham Jr. to draw inspiration from Asian and indigenous roots of our rich and diverse cultures.

The aim of the group is to present the wealth and depth of Asia within every person through the vehicle of performance in the repertoire of all-original music, dance, mime and song.

KONTRA-GAPI had its beginnings when in 1989, Prof. Pedro R. Abraham Jr. of the Department of Arts Studies of the College of Arts and Letters in the University of the Philippines (U.P.) Diliman was asked to conceive a score for "A Dream Play" by August Strindberg. Produced in Filipino translation by Dulaang U.P., the resident repertory theater company, the director had only one guideline: that the music may be distinctly Filipino and Asian. Throughout the run, the play merited consistently excellent reviews by artists, critics, academics, students and regular play goers alike with the music receiving special mention for its running exotic appeal. This encouraged the then ad-hoc band to transform itself into an independent performing organization. Soon after, they were invited by the Heritage Arts Center in Quezon City for their very first concert performance.

In February 1993 KONTRA-GAPI was appointed resident gamelan or ethnic music and dance ensemble by the Dean of the College of Arts and Letters.

For their significant trend-setting and visionary contribution, the group was awarded in February 1996 the U.P. Diliman Chancellor's signal plaque for Outstanding Achievement in the Arts (Performing Arts Category). 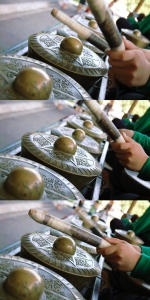 While Africa has massed polyrhythmic drums, Europe has the symphony orchestra, and the United States has the jazz and rock bands, the Gamelan is the quintessential orchestra of South East Asia.

The word "gamelan" derives from the Javanese "gamel" which means to strike or to hammer. Typically, a gamelan consists of percussion instruments such as gongs, and drums of graduated sizes, wood and metal xylophones of varied timbre, flutes and whistles, assorted bamboo wooden and metal percussion and voices for singing and for expressive vocables.

KONTRA-GAPI uses ideophones such as kulintang, gangsa, tongatong and kalutang; chordophones like the hegalong, kulibet, gitgit, and kuritang; aerophones such as the diwdiw-as, esmi, tonggali, and suling; and membranophones like the dabakan, sulibao and Cordillera drums of varying sizes and shapes. The human body itself through applause, stomping, chest pounding, clicking and other means turns into a producer of myriad sounds. There are, too, quaint pieces like the kuribaw or mouth harp and the tambi or zither-drum in a reserve of over a thousand instruments.

The collection is more than sufficient for the ensemble, which performs with as many as fifty and as few as five players. Most engagements require fifteen to twenty for a full program.

From April to November 1997, KONTRA-GAPI ventured on its first international concert tour of Austria, Belgium, Germany, the Netherlands and Switzerland in Europe, three provinces of Canada and seven of the United States. The group returned to the U.S. for more shows and the group was invited by embassies in Laos and Vietnam to celebrate the Philippine National Day.

From April to October 2000 KONTRA-GAPI went to its fourth international tour of North America and Canada carrying the title "Ambassador of Goodwill for the Culture and the Arts of the University of the Philippines for the year 2000".