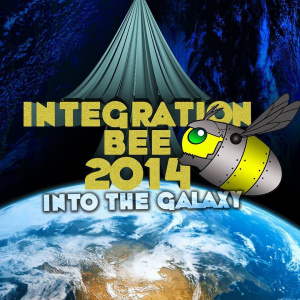 The official logo of the Integration Bee 2014.

The Integration Bee (commonly shortened as Integ Bee) is a well-known competition abroad, with versions of the contest regularly held in different well-known universities. [1] [2][3][4][5][6] The UP Physics Association (UPPA) has held the competition for four times already inside the University of the Philippines Diliman, and now on its fifth installment, the competition was scaled up to allow undergraduates of other universities to join the Bee.

This year's theme is "Into the Galaxy", which symbolizes the major leap in the contest's scale, which is now expected to gather the best calculus students and enthusiasts in the Metro.

Newton has invented calculus as a way to explain his laws of physics in the most efficient and elegant way, and up to now, calculus is still at the core of the development of pure and applied physics. As UPPA continues to rise up the bar and innovate, the UPPA has put calculus into an enjoyable contest that is exciting to watch even for people who hate mathematics. The competition is a first in the Philippines.

On March 8, 2014 at the National Institute of Physics, UP Diliman, contestants’ accuracy and speed, capability in mental solving, and mastery in solving integrals will be tested in this one of the nerdiest yet fun contest for college students.

A promotional game, the Differentiation Bee has been developed by the UPPA. The Differentiation Bee introduces the concept of derivatives and differential calculus in a very simple and enjoyable way through a shooting game. Higher order terms are reduced to zero by hitting them with a laser which transforms them to their derivatives. The game has been a hit since its release on March 3, 2014. [8]

This page has been accessed 3,264 times.