Difference between revisions of "Images of the Mother in Lino Brocka Films: 1970-1991" 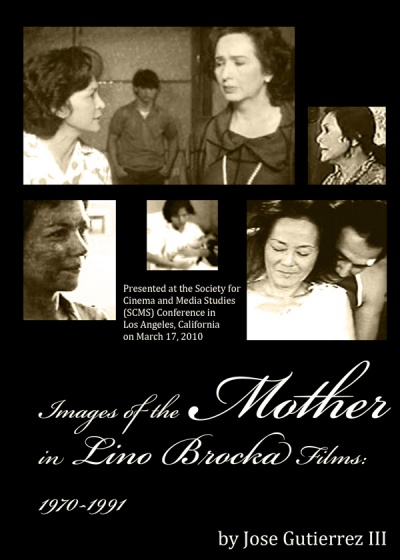 The images of the mothers in the films of Lino Brocka – a veritable auteur who used film as his medium in expressing his insights through his works from 1970 to 1991 – gravitate towards two clusters of images: 1) the mothers who struggle within the confines of their role, and 2) the mothers who question their role and affirm themselves as persons.

Parallel to the evolution of these images is Brocka’s development in political consciousness as an artist. Indeed, when Brocka understood and acted upon the oppressive situation in the Philippines under martial law, he integrated the issue of human rights in his films as his concept of women and their rights became more progressive. This crucial point in Brocka’s politicization as an artist also marks the shift in character between the said two clusters of images.

Brocka’s films from 1970 to 1982 generally belong to the first cluster of images. Here, Brocka’s familiarity and affinity with the types of mothers as portrayed by the earlier studio films, popular literature, and “komiks” are manifested. Within this cluster, the following images are identified and fleshed out: 1) the “ideal” mother; 2) mother as victim; and 3) the controlling matriarch. Among these, the “ideal” mother is the most oppressed. By accepting and internalizing the patriarchal construct of the mother as the “ilaw ng tahanan,” the woman enters into a role that imposes strict characteristics for her not just to display but internalize. Thus the “ideal” mother, to maintain the bliss of home and family life, leads her children in bringing pleasure to the father, looks and feels good all the time, and suffers silently. The mother as victim comes next to the “ideal” mother with regard to oppression. While for the “ideal” mother, the source of oppression is internal, for the victimized mother, it is external in the form of the violence and cunning of men and the patriarchal demands of the society that they dominate. The controlling matriarch also struggles within the confines of her role as mother. Superficially, the matriarch has power over people, objects, and objectified people, but this is never stable. The matriarch merely took over the properties left by the father; thus, she strains to maintain the volatile stability of her “realm” by controlling her children either through overt meddling or emotional manipulation.

As Brocka made a name for himself, he was empowered by producers who believed in his talent as an auteur who achieves a sense of balance between mass appeal and artistry in his films. He felt that he no longer had to be confined to the “tried-and-tested” and “safe” ways of portraying the mother. He progressively expressed his creative control amidst the commercial context of the industry.

As the auteur became more politicized as an artist, he was able to flesh out more progressive characterizations, narratives, and resultant images of the mothers which belong to the second cluster, namely: 1) mother as transgressor, and 2) mother as aggressor of patriarchy. Brocka’s films from 1984 to 1991 generally belong to this second cluster of images. Here, these mothers question their role and affirm themselves as persons. The liberated mother challenges patriarchy by openly expressing her sexual desire and refusing to judge herself from the patriarchal point of view that categorizes women as either “pure” or “loose” and mothers as either “good” or “bad.” The transgressive mother also declines to take it upon herself to protect her daughter’s innocence at the expense of the truth. She also refuses martyrdom and struggles for power with men both in the domestic and the larger social spheres. As the aggressor of patriarchy, the mother directly confronts not just her husband or father but the dominant patriarchal system itself. The mother, as a person, demands justice that is due to her. She also proceeds to search for social justice in the collective in which she, her husband, and children are part of. She does not limit her energy to the family; for her, the family and the collective are not distinct spheres. Indeed, the personal is also the political.