Halalan is an open-source voting system designed for student elections. It aims to automate the manual processes of elections such as counting, archiving, and voting. It is designed to be easy to use and secure.

Halalan is released under the GNU GPL v3 License. It is currently being maintained by the UP Linux Users Group[1], and is currently hosted at Google Code. 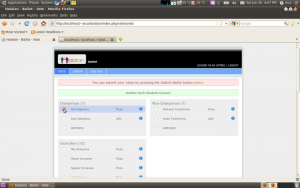 It was also used in the 2010 University-wide Student Council Elections.

Halalan was also used in Botong Isko 2010: an online mock polls for Clean, Transparent, and Honest Elections last . The elections was a mock poll/ survey for the upcoming 2010 National Elections which ran from March 18 to 25, 2010. Only positions in the national-level were included in the elections. Some 48,860 students from the UP System were included in the roster of voters although only 8.10% of those actually participated in the mock polls.

This page has been accessed 4,265 times.