A Conversation with Benedict Anderson 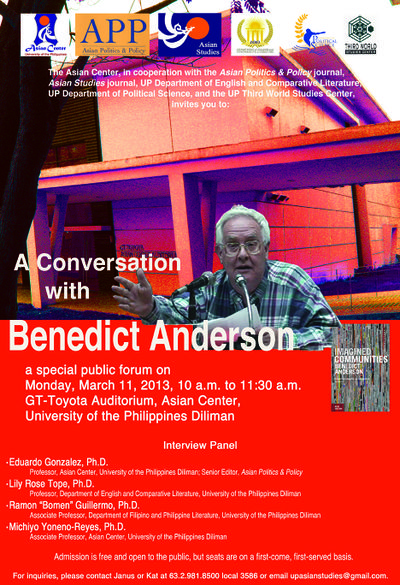 Benedict Anderson, renowned and distinguished scholar of Southeast Asian studies, will be a guest at a special public forum entitled, "A Conversation with Benedict Anderson." This forum will be in the format of a panel interview to be conducted by four scholars from the University of the Philippines-Diliman—Dr. Eduardo Gonzalez of the UP Asian Center, Dr. Lily Rose Tope of the Department of English and Comparative Literature, Dr. Ramon Guillermo of the Department of Filipino and Philippine Literature, and Dr. Michiyo Yoneno-Reyes of the UP Asian Center.

VENUE
GT-Toyota Asian Center Auditorium, University of the Philippines-Diliman ABOUT THE SPEAKER


Benedict Richard O'Gorman Anderson is Aaron L. Binenkorb Professor Emeritus of International Studies, Government and Asian Studies at Cornell University. He is best known for his Imagined Communities: Reflections on the Origin and Spread of Nationalism, which was first published in 1983 but has since undergone countless editions. It is a path-breaking and highly innovative work that has supplied one of the most popular and oft-quoted concepts in the academe and beyond. His other books include The Spectre of Comparisons (1998); Under Three Flags: Anarchism and the Anti-colonial Imagination (2007); and The Fate of Rural Hell: Ascetism and Desire in Buddhist Thailand (2012).

This public forum is organized by the UP Asian Center, in partnership with the Asian Politics & Policy journal (Wiley-Blackwell/PSO); the Asian Studies journal; the UP Department of English and Comparative Literature; the UP Department of Political Science; and the UP Third World Studies Center. The forum proceedings will subsequently be published in Asian Politics & Policy.

Admission is free and open to the public, but seats are on a first-come, first-served basis. The GT-Toyota Asian Center Auditorium is located on Magsaysay cor. Guerrero Sts., University of the Philippines-Diliman.

This page has been accessed 2,483 times.