Alumni of the Artists’ Circle Fraternity currently constitute a large portion of the UP College of Fine Arts faculty. It accepts into membership those who are practitioners of an art form and enrolled at any degree-granting unit of the University in Diliman and Baguio. When it was founded in 1972, The fraternity primarily focused on the visual arts but has since recruited members who focused in theater, literature, music, architecture and design. AC is regarded as an institution of notable accomplishment and reputation in the Philippine art scene. [2] 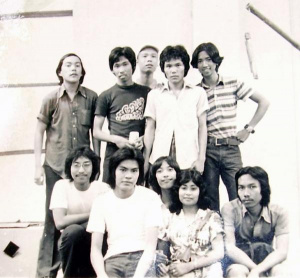 Pioneers of the UP Artists' Circle in 1972. Photo taken at the old amphitheater at the top floor of the University Library in Gonzales Hall now housing the University Archives

Some members of the UP Artists' Circle in 2008. Photo taken at the Amorsolo Hall, UP College of Fine Arts 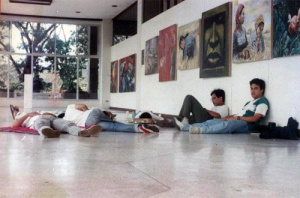 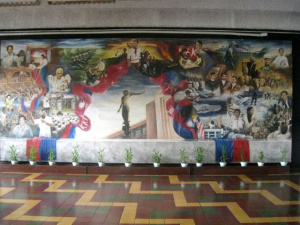 The UP Artists' Circe is engaged regularly in different activities such as art exhibits, art workshops, parties, concerts, out-reach programs, art lectures and fora, sports activities and other social functions. It also maintains minimal involvement with campus politics as one of the recognized members of the Student Alliance for the Advancement of Democratic Rights in UP (STAND-UP) although individual members may take different stances in varying campus and national issues aside from the political line of the alliance. [5][6]

Fraternity foundations have asked whether grants serve exclusively charitable purposes when made for:

The AC Alumni Foundation is a charitable and educational tax-exempt organization, separate and independent from the Fraternity, whose express purpose is to serve as an educational funding resource for the undergraduate and graduate student members of the Fraternity through leadership initiatives. The Artists' Circle Foundation is preparing our young men to be the value-centered leaders to guide us in the 21st century.

The Foundation is led by a Board of Governors headed by a fixed-term president.

The Pioneer is a fraternity publication which seeks to reflect the Artists Circle experience by delivering news of both Resident and Alumni Corps of the Fraternity, individual members, and the hosts communities; by addressing current issues facing fraternities; by educating and entertaining those interested in the welfare of the Artists' Circle; and by serving as a historical record.

Kalipunan is the Artists’ Circle Fraternity’s Annual Art Exhibit. It is a venue for advocating love for the arts and art education. Kalipunan is a joint project of faculty and resident members of the fraternity aimed at strengthening social awareness of various art forms and to lead an interest by student involvement for their growth. Some activities leading to the culminating art exhibit included workshops, art contests, cultural nights and parties in and out of campus. The campaign is aided by sponsors and advertisement through mass media and donations by the alumni. [7][8]

The motto of celebrations leading to the 40th Anniversary of the Artists' Circle is "Look Forward" and was launched in 2009 at the last installment of Kalipunan. The fraternity will showcase their rich history with an exhibit of collected memorabilia, and photograph blow-ups depicting tradition, songs and literature of the fraternity. Also included in the celebration are various other art exhibits, concerts, workshops, art fairs and a commemorative publication. All alumni of the UP Artists' Circle from all over the world are expected to join in the celebration.

UP College of Fine Arts Centennial

The year 2007 officially marked the centennial of the College of Fine Arts, one year ahead of the University's centennial on 2008. The fraternity is one of the most active alumni associations working closely with the college for the occasion.[9]

Among its notable members are: